When the Joint Organisations Data Initiative Oil (JODI-Oil) was first launched in 2001, the primary goal was not to build a database but to raise the awareness of all oil market players to the need for more transparency in oil market data.

The first priority of the six organisations was to assess the oil data situation in their respective member countries in order to better qualify and quantify the perceived lack of transparency. The assessment included the collection of monthly oil statistics from each organisation's member countries by means of a harmonised questionnaire on 42 key oil data points.

As the process gathered momentum, with more countries participating, the quality, timeliness and completeness of submissions all improved. As the scale of the initiative and global interest in it continued to grow it was clear that the information had to be made available in a compatible form: The JODI-Oil World Database was born.

Participants in the 5th JODI Conference in October 2004 then strongly recommended that this joint global database should be made freely accessible to all – organisations, countries, industry, analysts and others.

From concept to launch

Transparency does not happen overnight and despite the significant progress achieved since its inception, the database is still far from perfection. The IEF Secretariat, which took over the co-ordination of JODI in January 2005, and the six other partner organisations are fully aware of the limits and limitations of the database at this stage of its development. However, since transparency is central to the initiative, the organisations have undertaken to respond positively to the request expressed at the 5th JODI Conference that the database be made accessible to the public.

The organisations agreed to open the JODI-Oil World Database to the public on the occasion of the inauguration of the IEF Secretariat premises by the Custodian of the Two Holy Mosques, King Abdullah Bin Abdulaziz Al-Saud on 19 November 2005. This decision was taken with the full knowledge that users might be disappointed, as not all the data for all the flows, products and countries are always available.

This database should in no way be seen as a final product. The database evolves continuously. The quality of the data is assessed on a continuous basis too. Other flows already collected through the JODI questionnaire, such as imports and exports, will be included at a later stage. Making the data available was only the first step towards more transparency.

The database consists of:

Also a unique colour cell feature provides users with information on comparability of data with other sources. 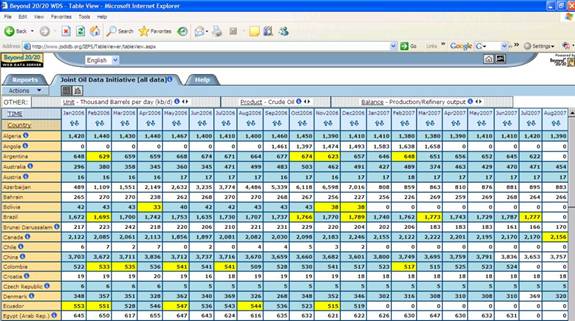 The participants in the 6th International JODI Conference, that took place in Riyadh in November 2006, identified a list of prioritised actions to be taken to further improve data quality and extend the Initiative. These actions are:

The organisations are very committed to these objectives but they cannot do it alone. They need full co-operation from countries and the oil industry. They also need comments from the users, be it praise or criticism and of course any suggestions are welcome.

The opening of the JODI-Oil database to the public was not the final goal of this initiative, it was just the beginning.

JODI in the Media